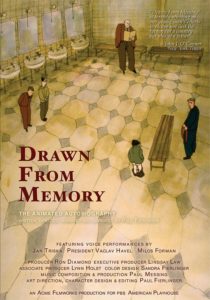 A screening of the animated autobiography Drawn from Memory (56min) by the Czech American award-winning animator Paul Fierlinger. With voices of Jan Triska, Václav Havel and Miloš Forman. The program also included a short video with an introduction by Paul Fierlinger and an overview of his work, More Vivid than this Morning’s News.

This event was part of the “Ticket to the New World” multimedia project of the Czech National Trust curated by Czech photographer Eva Heyd in 2018 in Prague. Eva Heyd presented her book Ticket to the New World / Lístek do Nového sveta presenting sixteen accomplished Czech émigrés, 1938-1939, who found refuge in the USA. The book is available online: www.tickettothenewworld.com

——————
PAUL FIERLINGER, born in 1936 in Japan, is an award-winning Czech American animator. His father, Jan Fierlinger, was a Czechoslovak diplomat, and his uncle,,Zdenek Fierlinger, an infamous prominent communist apparatchik (1948 -1968). Paul spent the WWII years in Vermont, where his busy parents left him in foster care. Later, back in postwar Czechoslovakia, they “parked” him in a boarding school in Podebrady. Here, his schoolmates were Miloš Forman, Ivan Passer and Václav Havel. Paul later captured his dramatic young life with its twists and turns in his feature biopic animated film Drawn from Memory.

Fierlinger established himself in 1958 as Czechoslovakia’s first independent producer of animated films. In 1967, he escaped from Czechoslovakia and eventually arrived back in the USA. He introduced himself to the American public with a black and white emotional film Prague 68′ Summer of Tanks, with authentic footage from the August 1968 occupation of Prague shot by his Czechoslovak colleagues. His personal experiences as an immigrant, traveling through various countries, were reflected in a 1978, fifteen-minute-long praise to America titled Rainbowland. Fierlinger triumphed in 1980 with It’s So Nice to Have a Wolf Around the House, for which he received many awards, including an Academy Award nomination for the best animated short film.

Fierlinger became a steady provider of many TV commercials and sales films for US Healthcare (now Aetna), winning various international awards. Together with his wife Sandra, they developed a small series of interstitials for Nickelodeon called Amby & Dexter: The Way of Silent, a Sesame Street series called Alice Kadeezenberry, and a twenty-minute film of children’s songs for the Children’s Book of the Month Club called Playtime.

In 2001, Fierlinger created a half-hour PBS special called Still Life with Animated Dogs, a film about dogs and other things of a divine nature. He also made an animation series for Oxygen Network, Drawn from Life, two-minute films that feature real-life women’s voices and simple stories. The Fierlinger’s own production of My Dog Tulip, based on the book of the same title by British author J. R. Ackerley, featured the voice talents of Christopher Plummer, the late Lynn Redgrave, and Isabella Rossellini.

Since founding his animation studio in 1971 in Philadelphia, PA, Paul has authored over 700 projects. Many of his films received considerable recognition, such as Fellowship in the Arts (1997), two Grands Prix at the Ottawa International Animation Festival (2000 and 2004), Peabody Award (2001), First Prize at the 2002 Zagreb World Festival of Animated Films (2002), a nomination at Annecy International Animated Film Festival (2009) and other prestigious awards.

Paul Fierlinger about his life

Animated films by Paul and Sandra Fierlinger
For a private demo of Drawn from Memory, please contact: fala2@verizon.net

This event was produced by the Czechoslovak Society of Arts and Sciences (SVU), New York Chapter, to accompany the “Ticket to the New World” exhibition at the Bohemian National Hall, NYC, curated by Czech photographer Eva Heyd for the Czech National Trust. In association with the Vaclav Havel Library Foundation/ Rehearsal for Truth Festival, and the Bohemian Benevolent and Literary Association (BBLA).