Skip to content
Main Page > Events > SUNDAY in the PARK

Zdenek NOVÁK, the primary author of the Lednice-Valtice UNESCO World Heritage Cultural Landscape Site report designation, will take you on a tour of this remarkable place. Some 600 years in the making, it is the largest man-made landscape in Europe, connecting two Liechtenstein châteaux eight kilometers apart. He will present the history of the landscape, activities of the Princes of Liechtenstein in agriculture, landscaping, architecture and art during the Renaissance, Baroque, and Enlightenment periods. He will also discuss the legacy of the 18th century Abbot Norbert Boccius in Valtice and of two talented orphans left in his care, Franz and Ferdinand Bauer, who later became world-renowned botanic artists.

Stefan YARABEK will then present the unique Lu & Tiree Chmelar Herb Garden in Valtice and pay homage to the late Lubomir and Tiree Chmelar, New Yorkers and co-founders of the Prague-Vienna Greenways program in the 1990s. Both were dedicated advocates of environmental and cultural preservation in Czechoslovakia after the fall of communism. They also initiated the World Monuments Fund restoration of the historic kitchen garden at the Valtice Château, the unique Lednice Conservatory and Adaptive Reuse Design Studies of both Lednice and Valtice Châteaux. 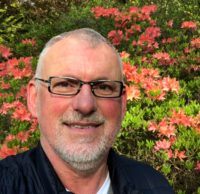 Zdenek Novák is the world-leading expert on the Liechtenstein Lednice-Valtice Cultural Landscape, and historic gardens and cultural landscapes. Currently servings as director of the National Agriculture Museum in Prague, he was previously director of the Monument Preservation Institute (NPU) in South Moravia, former deputy minister and general director at the Czech Ministry of Culture. Active in the Czech Heritage Fund, he is the author of the successful nomination of Lednice-Valtice to the UNESCO World Heritage List. He facilitated eight other successful nominations, including Kromeriž Château and Gardens and Tugendhat Villa in Brno. 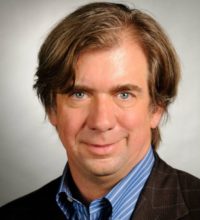 Stefan Yarabek is a landscape architect based in Saugerties, NY, and the Friends of Czech Greenways president. Of Czech and Slovak descent, Stefan helped design and develop the Prague-Vienna Greenways project in Czechoslovakia since its conception in 1990. He contributed to creating a St. John Nepomucene trail in Tel? (UNESCO site) as well, and worked on the initial restoration plan for the town square in Valtice. His collaborative work with Zdenek Novák and landscape documentation at the 1993 and 1994 Charrettes on Conservation and Economic Enhancement of Lednice Valtice, sponsored by the World Monuments Fund, contributed to the UNESCO designation as a World Heritage Cultural Landscape. Stefan is an active member of several major Hudson River Valley heritage and preservation initiatives, such as the Hudson River Valley Greenway and the Hudson River National Heritage Area. Furthermore he designed landscape restoration of an early 17th-century Bohemian settlement in the Hudson River Valley.

Free and open to the public.
Suggested donation $5.00

The event will be live streamed on Zoom.

RSVP through Eventbrite to receive the Zoom link.
https://www.eventbrite.com/e/sunday-in-the-park-tickets-153159763977

This event is organized by the Czechoslovak Society of Arts and Sciences, New York Chapter, and Friends of Czech Greenways in New York, with the support of the Bohemian Benevolent and Literary Association. 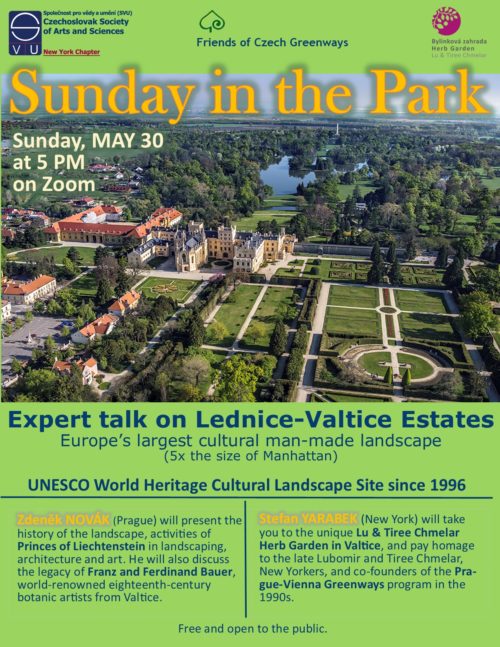