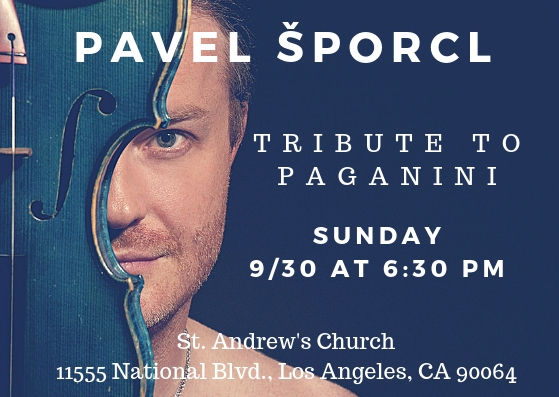 ABOUT THE ARTIST:
The most distinctive member of the young generation of Czech violinist, “the fighting musician” and top selling artist PAVEL ŠPORCL has been triumphantly received by audiences in major music venues throughout the world thanks to the combination of a rich classical background and unique unorthodox stage presence. Making regular appearances on television, radio and virtually all other media outlets Pavel’s music is right at home on the top of the charts. He first took up violin at the age of five, going on later to study at the prestigious Prague Conservatory and Academy of Music (with Vaclav Snitil). From 1991-1996 Pavel furthered his studies in the United States., under the tutelage of outstanding teachefes and virtuosos including Eduard Schmieder, Itzhak Perlman and Dorothy DeLay. The recipient of numerous priyes and distinctions, Pavel has created and impressive body of work as well as appearing on stages the world over with a variety of Czech and international orchestras. He is the sole young Czech violinist listed in the book “Violin Virtuosos: From Paganini to the 21st Century” by the world-renowned music critic and historian Henry Roth, Pavel Šporcl’s extensive repertoire is comprised of 40 violin concertos, countless sonatas, along with numerous chamber and virtuoso compositions. His performances garner both popular and critical acclaim. Reviews of the inaugural concert of the Czech Philharmonic’s 2001/2002 season which took place at Prague’s Rudolfinum under the baton of Vladimir Ashkenazy was recorded and broadcast by both Czech Television and Czech Radio. For his performance in Dvorak’s Concerto for Violin and Orchestra in A minor critics lauded Pavel Šporcl as “a talent that is born once in a century…”.