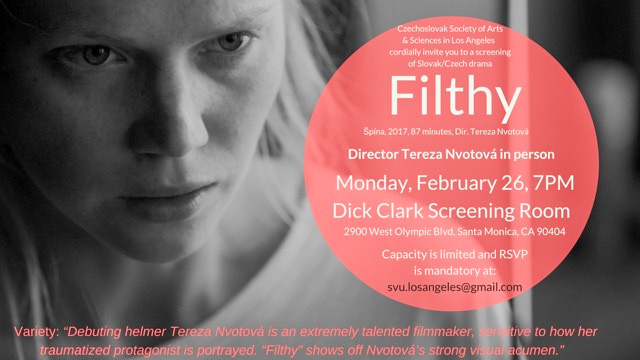 SVU-LA leased a intimate screening room in Santa Monica for this occasion. As the seating capacity of the theater is 25 seats we would like to kindly ask you to RSVP ahead of time. Please send your RSVP at: svu.losangeles@gmail.com by Friday, February 23.

ABOUT THE FILM:
Slovak/Czech drama Filthy was awarded Best Film and the Innogy Award for the Discovery of the Year at the Czech Critic’s Awards 2017. Filthy is the coming-of-age story of the seventeen year-old Lena. In love with a boy for the first time, Lena longs for freedom and adventure. Her world is shattered instantly when her teacher, whom all her classmates have a crush on, rapes her in her own home. Instead of sharing her trauma, Lena keeps it a secret, even from her best friend. Her pent up feelings drive her to attempt suicide. With her family in shock, Lena ends up in a psychiatric ward.
For more information: Official website

ABOUT THE DIRECTOR:
Tereza Nvotová was born and grew up in Bratislava and currently lives in Prague. She is about to graduate from FAMU as with a Master’s in Direction. Filthy is her feature film debut. She also directs documentary movies for Czech and Slovak Public TV and is recently working on her second feature documentary about former Slovak PM Vladimir Mečiar in coproduction with HBO Europe. Tereza also writes and works as an actor in feature films.

PARKING:
Parking ONLY outside – entrance from Stewart street not from Olympic. There are two entrances to the parking lot – one on Olympic and one on Stewart Street. Due to the train, it is easier to enter off Olympic. The parking lot is located directly behind the Dick Clark Production building. On week nights after 6 PM, guests can park in any marked spot outside.

RSVP is mandatory at: svu.losangeles@gmail.com by Friday, February 23, 2018