ONLINE EVENT on Zoom on Wednesday, NOVEMBER 18 at 7 pm (EDT)

Please REGISTER HERE to receive the link to the Zoom event. We will email you the link 2 days before th eevent.

An online mini-series presenting three-minute videos of Czech and Slovak artists and professionals in New York and their reflections on how the Covid reality affected their work and projects. In English

EPISODE 2 will feature three accomplished creative New Yorkers, each in a different field: Daniela Vancurová (pre-school teacher and consultant), René G. Vašícek (writer and educator), and Pavel Kraus (visual artist).
Moderated by Christopher Harwood, Q&A will follow the presentations.
Have a beverage of your choice by your side to toast to New York’s better future. 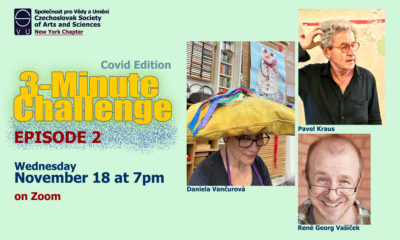 Daniela VANCUROVÁ, born in Prague, received her MA from Teachers College at Charles University in Prague in 1987 and additional BA credits from Manhattan Community College. Since 1988 she has worked at Brooklyn Free Space, a cooperative preschool implementing a learning-through-play philosophy, recognizing each child’s individuality, learning style and interest. Due to the Covid 19 epidemic, the school had to reorganize and reinvent its unique style. For medical concerns Daniela was furloughed until the virus is under control. She misses her little “jitterbugs” and hopes to return soon to the school. But meanwhile, she appreciates having the time to pursue her interest in Japanese cuisine, creating finger puppets or taking walks.

René Georg VASICEK was born in Austria in 1969 to Czech parents defecting from Czechoslovakia. He grew up in the pine barrens of Eastern Long Island and has lived in New York City since the Nineties. His writing has appeared in Wigleaf, Hinterland, Bellevue Literary Review, Western Humanities Review, Gargoyle, Mid-American Review, Barrelhouse, Post Road, and elsewhere. René earned an MFA at Sarah Lawrence College and was awarded an NEA fellowship. He is an adjunct lecturer at Lehman College in the Bronx and at BMCC in Manhattan. He lives in Astoria, Queens with his wife and two sons. His debut novel The Defectors is loosely based on experiences of Czechs and Slovaks in a totalitarian regime. He also enjoys boogie-boarding and the search for extraterrestrial intelligence in the Cosmos.

Pavel KRAUS, a native of Pilsen, emigrated after the Soviet invasion in 1968 and eventually arrived in the USA. He received his MFA from The School of The Art Institute of Chicago in 1974. Since 1984 he has been residing and working in New York City and since 2000, at his studio in DUMBO Brooklyn. Over the past 40 years, he has been focusing on an extensive body of work entitled “Sex, Death, Offerings”. These works incorporated variations of media/techniques including the ancient pierre dure technique and the marriage of organic/inorganic elements. Pavel’s works can be found in private collections and have been exhibited extensively nationally and in Europe and reviewed and published in various publications, including Art in America. In 2014, Pavel had a solo exhibition “Enigma” at the Stephen Romano Gallery in DUMBO, Brooklyn, curated by David Ebony. His 40-Year-Retrospective was reviewed in David Ebony’s Top Ten New York Gallery Shows of 2016. From 2016 to 2018 Kraus completed five solo shows culminating in Roma in January 2018 at the Long Island University Brooklyn campus. During the epidemic, he continues going to his studio and working on new projects inspired by the distant past.

Our YouTube videos were made available to you thanks to previous grants from the Czech Ministry of Foreign Affairs and BBLA, and donations from some of you.

ZOOM RECORDING OF THE EVENT 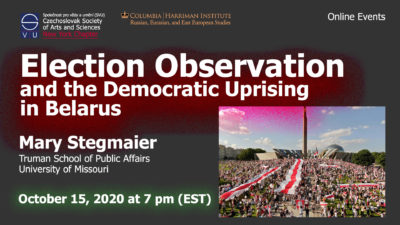 How do we know if elections meet international democratic standards? In this presentation, Dr. Mary Stegmaier will discuss the process of international election observation done by the Organization for Security and Cooperation in Europe (OSCE), her experience observing parliamentary elections in Belarus, and the Belarusian democratic uprising that began in August after the rigged Presidential Election. The presentation will conclude with a discussion about OSCE election observation in the US.

Mary Stegmaier, Ph.D., a long-time member of the Czechoslovak Society of Arts and Sciences (SVU), is the Vice Provost for International Programs and an Associate Professor in the Truman School of Public Affairs at the University of Missouri. As a scholar of comparative politics, she has spent extensive time researching in the Czech Republic. Her work on international elections and voting behavior has been published in academic journals. Dr. Stegmaier has also contributed to the Washington Post and the Brookings Institution blog and served as an international election observer with the Organization for Security and Cooperation in Europe (OSCE) in Albania, Belarus, Kyrgyzstan, and Macedonia. 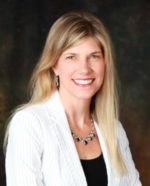 In cooperation with the Harriman Institute at Columbia University, NY and with the support of the Bohemian Benevolent and Literary Association (BBLA) in New York.

As President and Principal Auctioneer of Swann Auction Galleries in New York City, Nicholas is also director of the auction house’s Vintage Poster Department and has appeared for over 20 years as an appraiser on the PBS Television series Antiques Roadshow as the poster specialist. Posters from the Lowry Collection have been exhibited at the National Czech & Slovak Museum & Library and the Dutch Poster Museum. 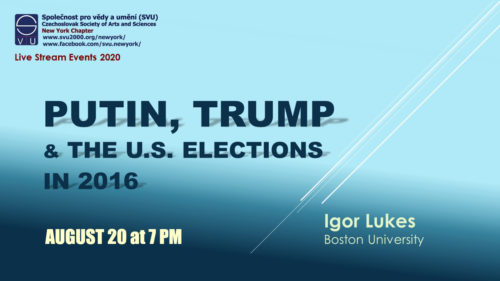 The electoral victory of Donald Trump in 2016 surprised everyone, including the winner, the vanquished, and all the specialists. Even today, almost four years later, bitterly divided citizens struggle to understand what happened.

The talk seeks to cast light on several lesser-known factors behind Trump’s victory four years ago and it endorses the view that the warning lights.

In cooperation with the Harriman Institute at Columbia University 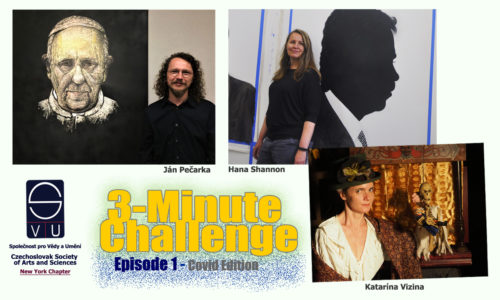 The 3-Minute Challenge series is a spin-off of our “6-Minute Challenge” program held at the Bohemian National Hall. A kind of an oral history project, it presents Czech and Slovak artists, scholars and professionals in New York, and their reflections on how their work has been affected by the current (Covid 19) reality. They are challenged to shoot a 3-minute video.

We hope that you are healthy and safe in these trying times. We miss you!

Until we can meet again at the Bohemian National Hall in Manhattan, we invite you to visit our new YOUTUBE channel and view six events that you might have missed. The videos are divided into shorter segments for easier viewing.

They include Escaping from Czechoslovakia (2016), stories of New Yorkers who escaped from communist Czechoslovakia, and Posezeni: Remembering New York’s “Little Bohemia (2018), an entertaining evening of memories of four old-timers who live(d) in the neighborhood of the Bohemian National Hall. Brilliant young Czech and Slovaks are featured in one edition of our popular 6-Minute Challenge series (Nov 2018). Enjoy the performances by Czech and Slovak Newyorkers -musicians and singers- in The Tribute to the Art of the Folksong (2018), and the concert 5+1:Jana Jarkovska (2019) by the gifted Czech flutist Jana Jarkovska presenting work of five young Czech women composers. Learn about the experiences of three Americans living in 1990s Prague (2019).

Please subscribe! Your free subscription will help us qualify for a customized name of the link. Feel free to leave us a comment. 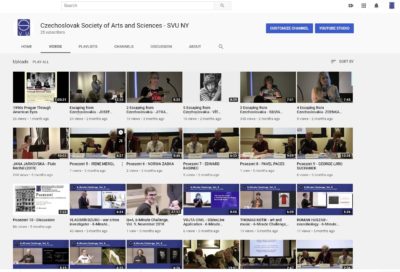 you may use your credit card via our PayPal account.

We regret to announce that due to Covid -19, all March events at the Bohemian National Hall have been cancelled.

We hope to reschedule the 6-Minute Challenge in May 2020. Hopefully by then, the virus will weaken and cease to exist.

Come meet Czech and Slovak artists, professionals, students, and scholars who will be challenged to introduce the subject of their project, research, or studies in a short presentation limited to six minutes and in the language appropriate for a non-expert audience. In English.

Light refreshment and networking will follow the presentations.
RSVP

Organized by the Czechoslovak Society of Arts and Sciences (SVU/NY), New York chapter, with support of the Consulates General of both the Czech Republic and the Slovak Republic in New York. 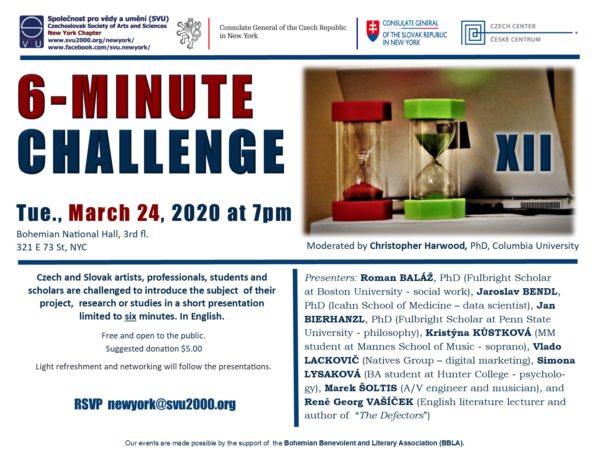 A lecture by Jindrich Toman, Professor of Slavic Languages and Literatures at the University of Michigan, Ann Arbor.

The talk will guide the audience through select points that mark legal and cultural emancipation of Bohemian Jewry in the decades between the so-called Josephinian Decrees of the 1780s and the Monarchy’s liberal constitution of 1867. We will trace the culture of the disappearing ghettoes, attempts at a Czech-Jewish dialogue in the 1840s, the revolutionary year 1848, and conclude with the liberal 1860s.

Jindrich Tomanis a Professor of Slavic Languages and Literatures at the University of Michigan, Ann Arbor. He has been following an academic path defined by languages and cultures of Central Europe, initially focusing on linguistics and gradually shifting his research interests towards cultural history and visual culture. A concurrent line of interest focuses on Jewish culture in Bohemia. He teaches courses in the area of literary and cultural studies, including “Jewish Prague.”

Organized by the Society for the History of Czechoslovak Jews in New York,
and the Czechoslovak Society of Arts and Sciences, New York Chapter.
In cooperation with the Consulate General of the Czech Republic in New York
and with the support of the Bohemian Benevolent and Literary Association
and the Czech Ministry of Foreign Affairs. 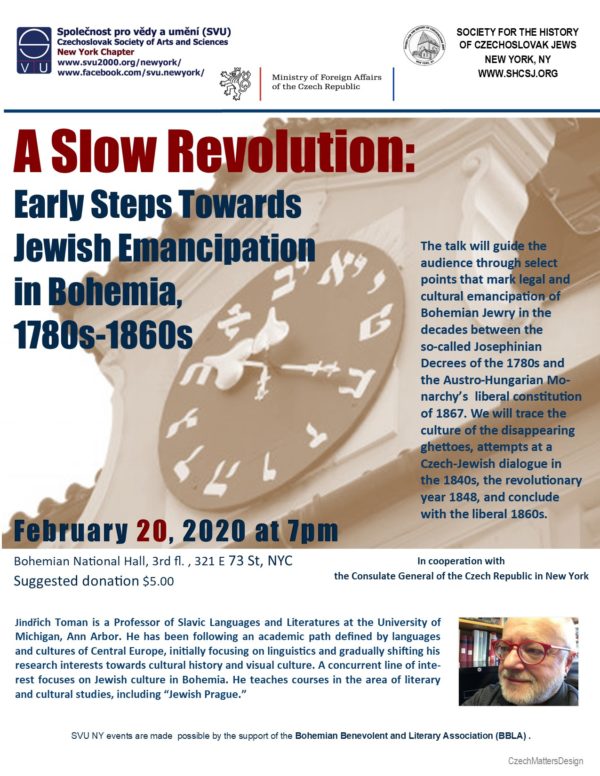