With Carpatho-Rusyn Society New York
In cooperation with the Consulates General of the Czech Republic and the Slovak Republic.

Edward Kasinec will introduce the Czech ministerial official, translator of Ukrainian literature and amateur photographer Rudolf Hulka (1887 – 1961) and his only recently uncovered color and hand-colorized photographic images that depict Sub-Carpathian Ruthenia in the early 1920s, capturing all the geographic regions, architecture, and peoples.

The entire collection, preserved in the vaults of the Slavonic Library in Prague, includes more than 4,400 unique visual materials depicting Sub-Carpathian Ruthenia, Slovakia, Moravia, Bohemia and, to a lesser extent, other parts of Europe and North Africa Edward Kasinec has served as a library curator at Harvard University, University of California, Berkeley, and for more than a quarter century at the Research Libraries, The New York Public Library. He is the author of many publications in the field of Russian and East European culture and has travelled, consulted and lectured throughout North America, Europe and Asia. 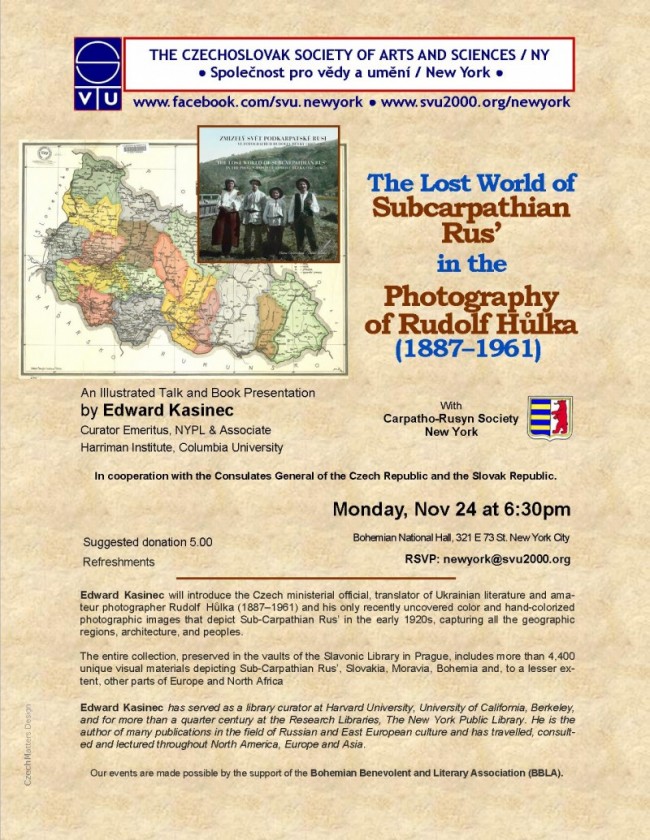 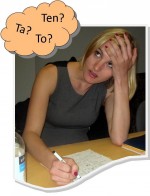 AN UPDATE!
We are happy to report that much progress has been achieved in both, creating the app and raising some of the needed funds.

Many thanks to everyone for your donation, be it $20 or $1,000, including the Czech Ministry of Foreign Affairsâ€™ Grant Program for Czechs Living Abroad, the Adjunct Professional Development Fund at New York University, the Czechoslovak Society of Arts and Sciences, New York Chapter; and private donors including Josef Balaz and Ludmila Hess Schwarzenberg. We are also very grateful to VÃ¡clav CvrÄek, director of the Czech National Corpus Institute (ÃšÄŒNK) for technical assistance.

HOWEVER, there is still a lot of work to be done and WE NEED TO RAISE AN ADDITIONAL $2,600!

We hope you will join other sponsors and contribute funds to help complete, test and launch the application by the end of 2014. Your donations are tax-deductible in the USA. All sponsors will be listed on the application and in all promotional texts.

WILL YOU HELP?
You can send your tax-deductible contribution

1. By a secure payment to the CSAS’ PayPal account with your credit or debit card:

A special screening of two Slovak documentary films depicting 1988-1989 events in Slovakia. US premiere.
Part Two of the ongoing Forget or Forgive? series of documentary films, recounting the dark periods in Czech and Slovak history under communism, and discussions about facing collective memory.

Films are produced by the Nationâ€™s Memory Institute in Slovakia. In Slovak with English subtitles.

Gabriel Ariel Levicky, writer, translator, poet and cartoonist, was born in Slovakia. In August 1968, he participated in the anti-Soviet invasion protests in Bratislava and left the country soon after for Israel. After returning to Czechoslovakia a year later, he was involved in the underground movement and became the subject of secret police harassment, especially after signing Charter 77. In 1979 he left Czechoslovakia again, first to San Francisco and then to New York City.

The Nation’s Memory Institute / Ãšstav pamÃ¤ti nÃ¡roda (ÃšPN) is a public organization founded in 2002 by the Slovak Parliament for the purpose of investigation, analysis and disclosure of documents from the dark period of Slovak fascism to Soviet style communism in Slovakia 1939-1989. ÃšPN holds a vast reference archive open to public scrutiny.

Organized by the Czechoslovak Society of Arts and Sciences in New York (SVU-NY).
In cooperation with the Nationâ€™s Memory Institute (Ãšstav pamÃ¤ti naroda) in Bratislava and the Consulate General of the Slovak Republic. 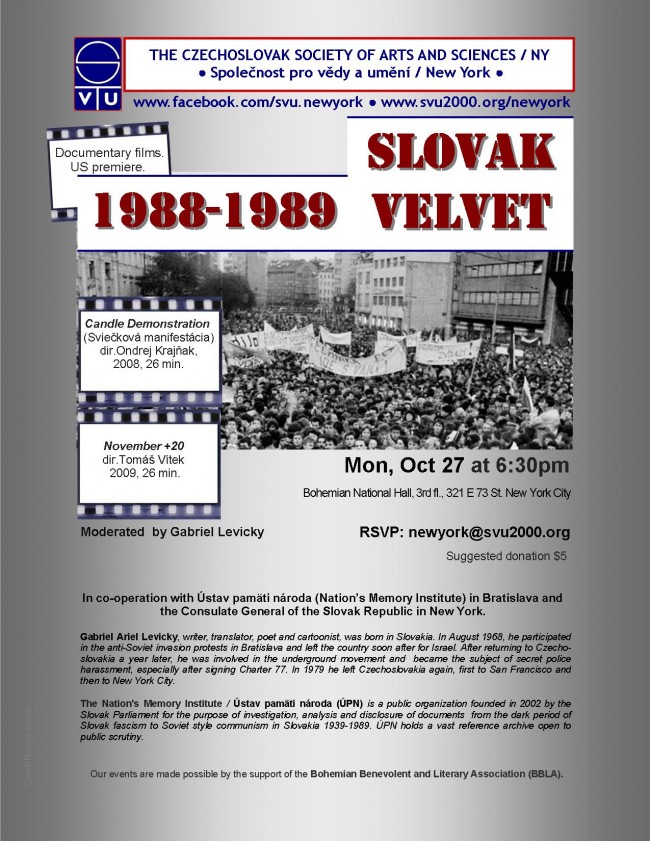 A screening of a documentary film
Karel Hasler: The immortal Balladeer of Prague

The film will be introduced by its author, and the son of Karel Hasler, Thomas Hasler.
The screening will be followed by a sing-along of “haslerky”, popular songs composed by Karel Hasler (in Czech) led by Katarina Vizina, a singer of Cabaret Metropol, and a graduate of Janacek Academy of Music in Brno.
Texts will be available.
Refreshments. 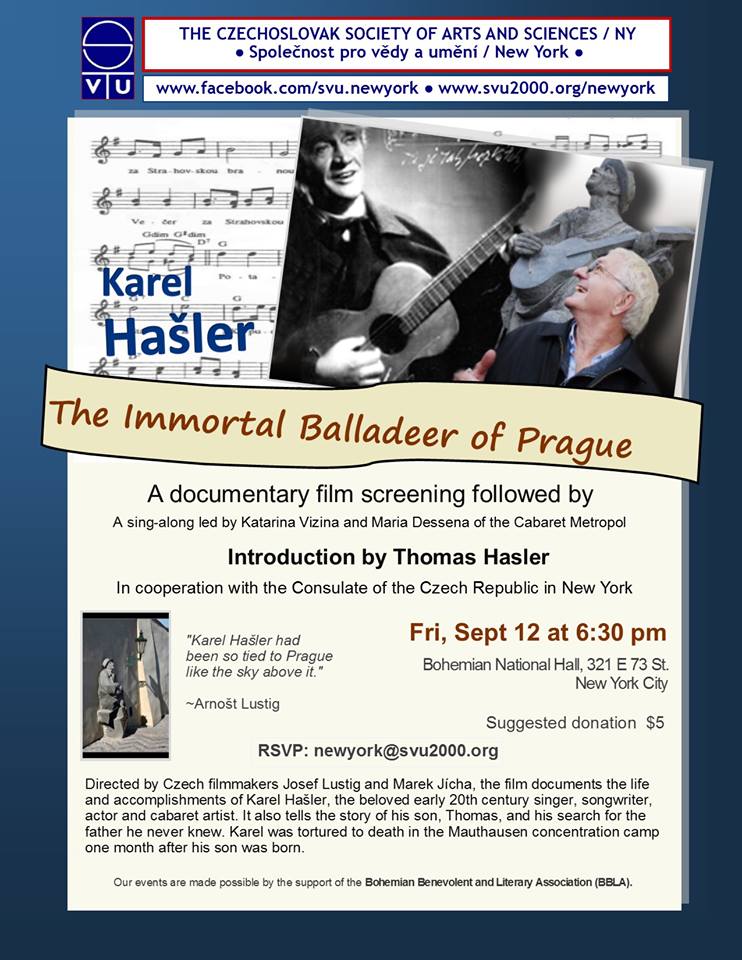 THE CASE OF CZECHS: Emigration in New York 1874-1966
and the iconic Newyorske listy, the longest-lived Czech newspaper in New York 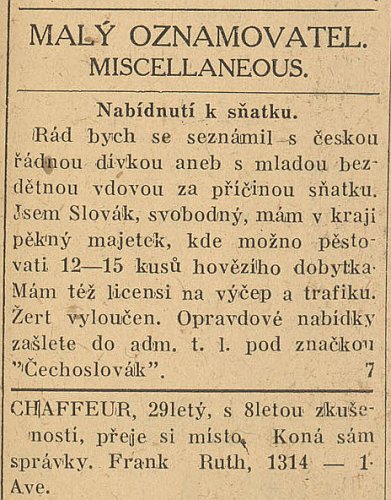 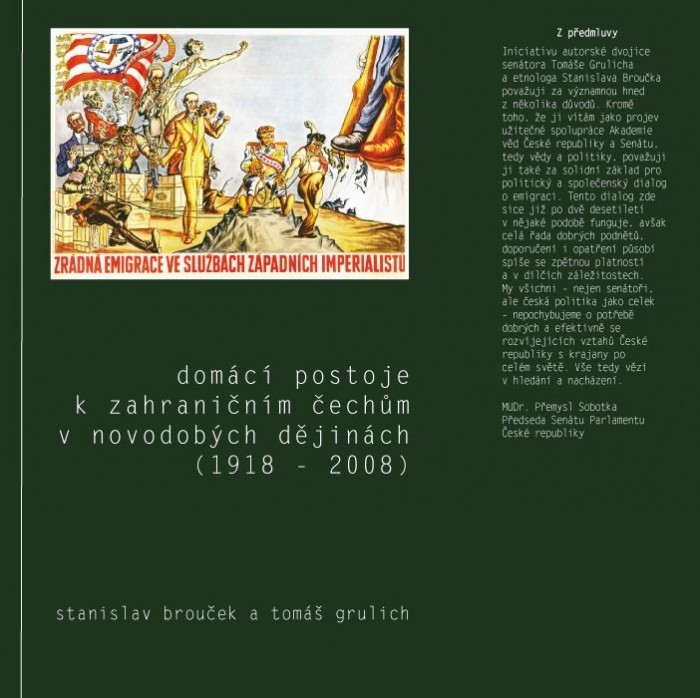 A presentation by Daniel Reitzner, PhD. 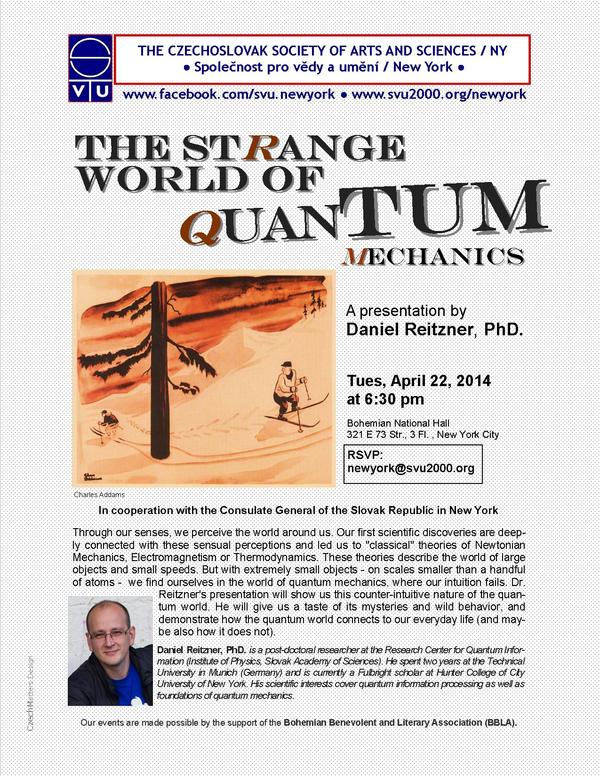 A celebration of the 100th birthday anniversary
of the beloved, irreverent Czech author
Bohumil Hrabal

Readings (in Czech and English) and screenings, March 30, 5 PM at BNH

In cooperation with Czech Center NY

RSVP:
newyork@svu2000.org
Free and open to the public. Contributions welcome. 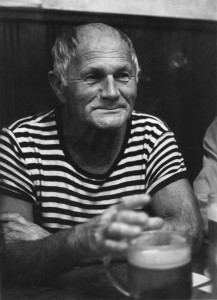 The larger American public was introduced to Hrabalâ€™s work through the Oscar winning film Closely Watched Trains directed by Jiri Menzel (1966). The humor, poetry and rich language in Bohumil Hrabalâ€™s books was a challenge for translators into more than 27 languages. Eleven of his books are available in English.

This evening is for everyone who has fallen in love with Hrabal’s stories, his characters and his language, or at least been curious about them: from longtime aficionados of his books, to those who may only have seen one of the film adaptations, to those who have just heard about Hrabal and want to learn what the buzz is all about.

Please send your short selection to Suzanna Halsey at newyork@svu2000.org by March 15. Indicate if you would be willing to read your selection during the event and in what language. For information contact Suzanna at 646 580 6612. 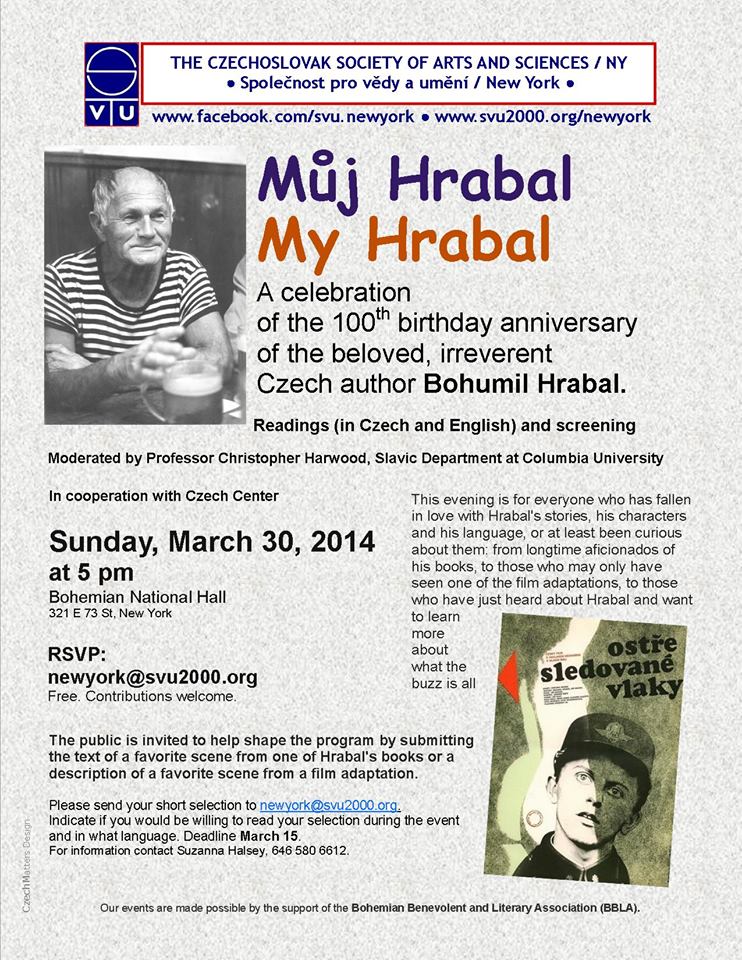 “Karel Capek still has not received the attention he deserves in the Anglo-American world, and Czechoslovakia still has not been fully assimilated into our picture of interwar Europe. Thomas Ort accomplishes both tasks beautifully”
David S. Luft, Professor of History, Oregon State University

“…a compelling portrait of Czech artistic life before and after World War I adds important new insight into the interconnections between aesthetics and politics during this turbulent period.” – Mary Gluck, Professor of History, Brown University 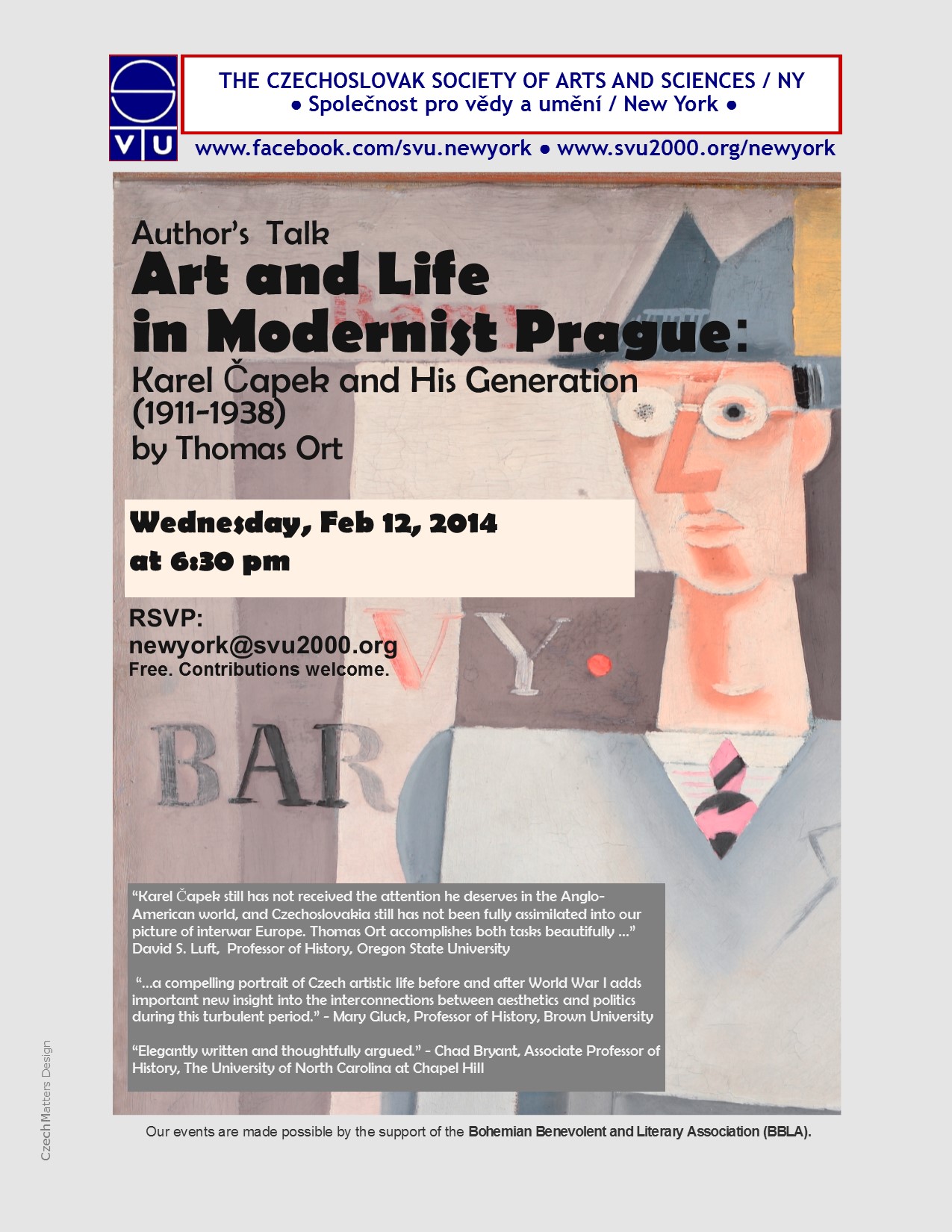