Thank you for coming to our programs in the year 2015!

Your comments and suggestions are welcome. If you were not able to attend our events please review them under 2015 Events in the sidebar or you can access a PDF file with SVU-NY 2015 EVENTS OVERVIEW.

Many thanks to Jitka Illner for her successful years as the president of our SVU NY chapter and very warm welcome to Christopher Harwood as the new president.

We are looking forward to seeing you at some of our exciting programs in the next 2016 season.

Thank you for your tax-deductible donation in support of our work. 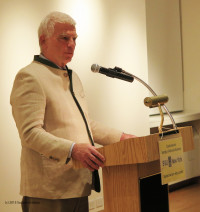 Professor Magocsi, scholar and a major force behind the modern Carpatho-Rusyn revival, discussed present-day instability in Eastern Europe made worse by the interest of Putinâ€™s Russia and Orbanâ€™s Hungary in Ukraineâ€™s Transcarpathian region (historic Subcarpathian Oblast), territory of former Czechoslovakia until 1939. He also introduced his latest book â€œWith Their Backs to the Mountains: A History of the Carpathian Rusâ€™ and Carpatho-Rusynsâ€. 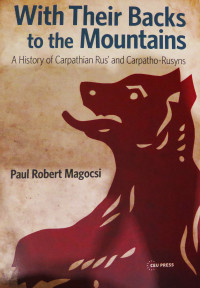 Paul Robert Magocsi, PhD. holds degrees from Princeton University (Ph.D. 1972) and Harvard University (Society of Fellows 1976). Since 1980 he is a professor history and political science at the University of Toronto, where he also holds the professorial chair of Ukrainian Studies. He has published 30 books including The Shaping of a National Identity: Subcarpathian Rus’, 1848-1948 (1978); Galicia: A Historical Survey and Bibliographic Guide (1983); Historical Atlas of East Central/Central Europe (1993/2002); The Roots of Ukrainian Nationalism (2002); and Ukraine: An Illustrated History (2007). He is also co-editor and main author of the Encyclopedia of Rusyn History and Culture (University of Toronto Press (2002).

In cooperation with the Fulbright Commission in the Czech Republic.

Czech and Slovak students and Fulbright scholars at universities and institutions in the New York City area were challenged to present the subject of their studies and research, in any field, in a short presentation limited to six minutes. In English.

PHOTOS are available at SVU-NY FB page:
PHOTOS
Video will be available later.

Thank you Vlado Simko, MD for your enthusiastic review:
“…The 6 Minutes program is most resourceful and witty opus from the production generated by the Halsey inventive engine.

… The quality of the speakers, their English fluency and self confidence, as well as the tight moderation by Christopher (Harwood) were admirable. 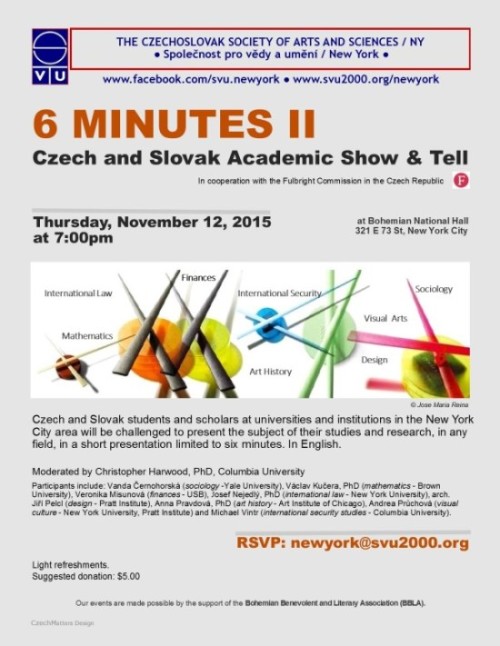 Due to unforeseen circumstances the event has to be postponed to a later date. We are sorry for the inconvenience.
The Board

Come and learn first-hand from H.E. Edita HrdÃ¡ about her work, challenges and accomplishments in the last 4 years during her demanding post as the Czech ambassador and Permanent Representative to the UN. 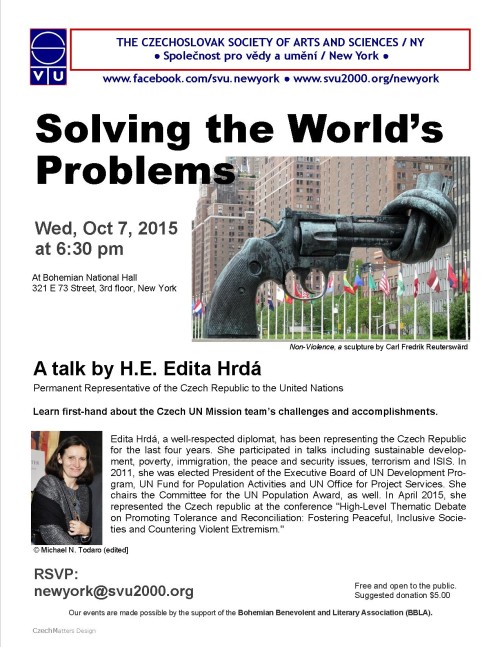 ONDREJ KRAJÅ‡ÃK is a documentary filmmaker. He received his PhD in journalism from the John Paul II Catholic University in Lublin. Since 2004, he is the head of the History Department at Nationâ€™s Memory Institute (Ãšstav PamÃ¤ti nÃ¡roda) in Bratislava where he has created an audio visual archive. During the communist era, Dr. KrajÅˆÃ¡k participated in the underground church movement. He is a member of the Slovak Confederation of Political Prisoners and of the Steering Committee of European Network Remembrance and Solidarity.

The evening included a screening of a Slovak documentary film “Ako som mal zaÄiat tretiu svetovu vojnu” (Accused of Planning WW III) by Juraj Brocko. Based on Â a true story of a political prisoner Karol Noskovic, one of thousands innocent victims of red terror in the 1950s, the film offers aÂ dramatic testimony of paranoid communist system andÂ portraits an example of brutal, neo-Stalinist persecution in Slovakia.

Dr. KrajÅˆÃ¡k also awarded a special merit medal to our board member Gabriel LevickÃ½ for his participation in the political dissent movement during the Communism in Slovakia. 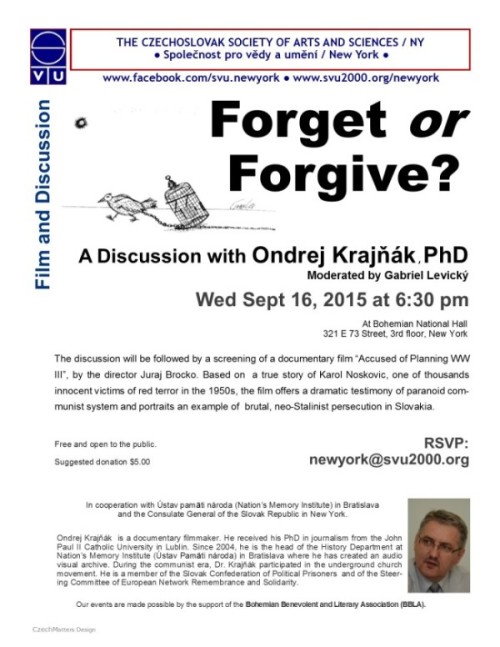 Join us in congratulating FIVE of the “6 MINUTES” PRESENTERS on their academic achievements. We are very proud of them. Mnoho Å¡tÄ›stÃ­!

Board of Czechoslovak Society of Arts and Sciences NY

SAVE THE DATE: The next â€œ6 MINUTESâ€œ is scheduled for November 12th, 2015 at the Bohemian National Hall in NYC. 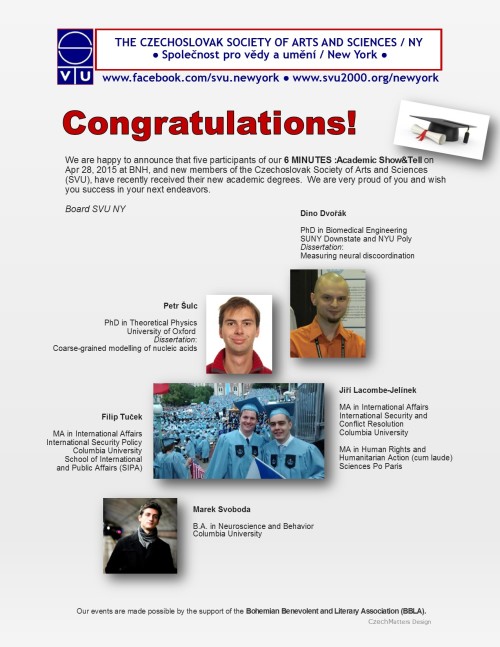 The Short Long Journey|Kratka dlouha cesta, (2009) is a powerful documentary capturing the journey of Fedor Gal, a respected Czech sociologist, as he follows his fatherâ€™s fate after his transport from the Terezin ghetto. Born in March of 1945 in Terezin, Gal never met his father because by then, he was moved to the concentration camp in Sachsenhausen. His father was shot dead during a death march in the same year Gal was born, two months before the end of the WWII. Gal reflects on the horrific past, life, death and humanity bringing a parallel to societal malaise that still survives in the present. 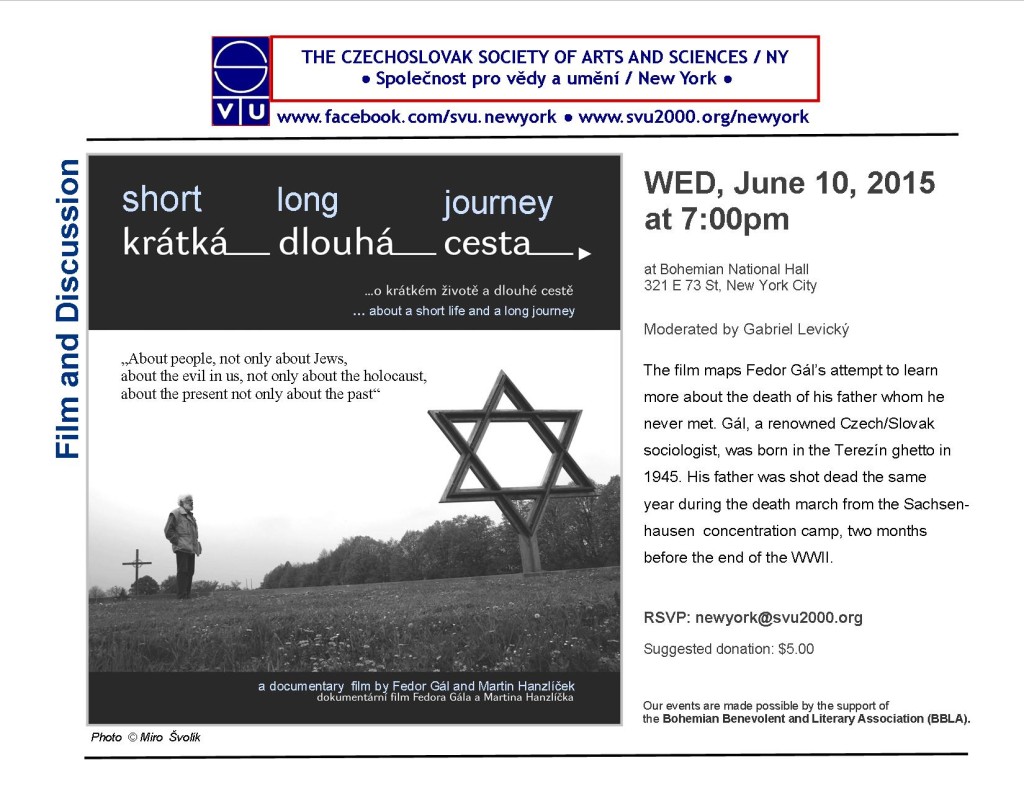 The young and bright Czech and Slovak women and men, students, interns and Fulbright scholars studying or working at universities and institutions in the New York City area were challenged to present the subject of their studies, in any field, in a short presentation limited to six minutes each.
Â
The event was a great success! Thanks to all!

PHOTOS from the event are on our Face Book Page. 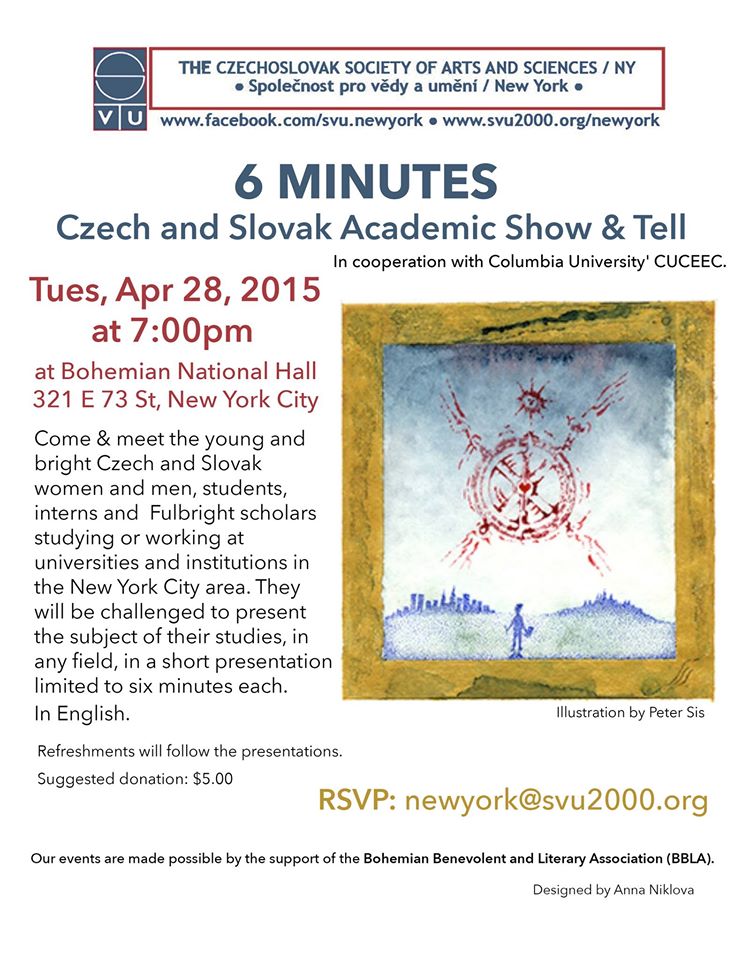 Can future societal developments be detected in changing word patterns in presidential speeches? How can computational linguistics and national corpus help?

In his talk, Dr. CvrÄek will explain the system and practical use of the national corpus, an extensive database of texts used for language analysis. He will present a case of the last Communist president of Czechoslovakia Gustav HusÃ¡k and his speeches from 1975 until the Velvet Revolution in 1989.

Followed by a wine reception.

VÃ¡clav CvrÄek, Ph.D., is director of the Czech National Corpus Institute at Charles University (ÄŒNK UK) in Prague, one of the most well-regarded centers for corpus-based language research in the world. His research focuses on corpus linguistics, grammar, quantitative linguistics and discourse analysis. His publications include the Grammar of Contemporary Czech (Mluvnice souÄasnÃ© ÄeÅ¡tiny, 2010), the first corpus-based description of written as well as spoken Czech. He is also a co-lexicographer of several frequency dictionaries: Dictionary of Karel ÄŒapek (2007), Dictionary of Bohumil Hrabal (2009) and the Totalitarian Dictionary of Czech (2010). Dr. CvrÄek has been a Fulbright fellow at Brown University and is actively involved in international collaboration with US and European universities. 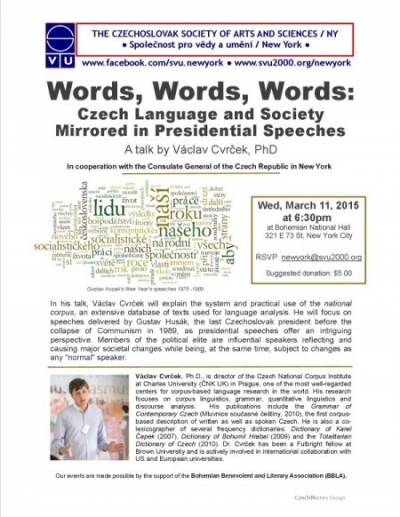 Suggested donation: $5.00
VÃ­t HoÅ™ejÅ¡ will present the over 300-year old Czech tradition of marionette theater and the so far, little-known history of Czech puppetry in the United States.
He will demonstrate the antique marionettes that he discovered in 1984 in the attic of the Jan Hus ChurchÂ on the Upper East Side, in the heart of the former 19th century Czech and Slovak tenement neighborhood.Â Â As a crowning point of his presentation, he will perform a short excerpt from a traditional Czech marionette play using puppets and a set originally owned by the Hon. Madeleine Albright who recently donated her toy theater to the BBLA Association to be used by the Czech community in New York.

Do not miss the upcoming show of the Czechoslovak American Marionette Theater!
“The Magic Garden, or,The Princess who Grew Antlers”
March 5-22
Theater for the New City
155 First Ave. (at E. 10th Street)

Thursdays through Saturdays at 8:00 PM
Saturdays and Sundays at 3:00 PM
www.theaterforthenewcity.net 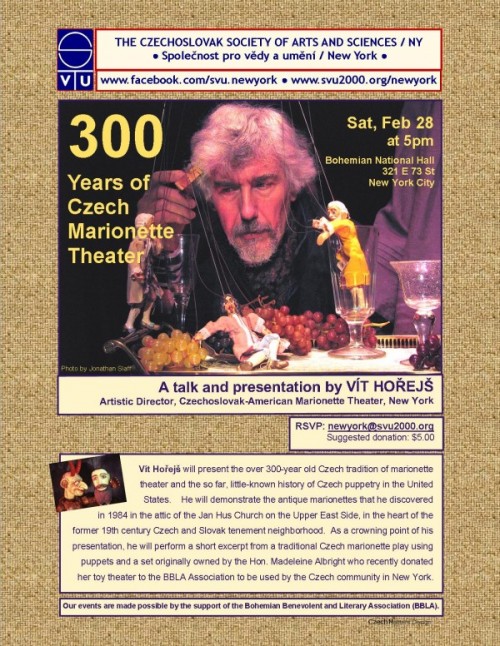 A talk by Dr. Anna MatuÅ¡kovÃ¡ on political campaigning in the Czech Republic.
Wed, Jan 21 at 7PM 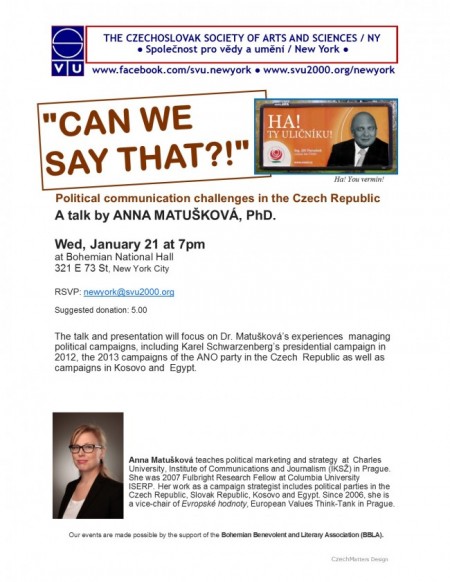 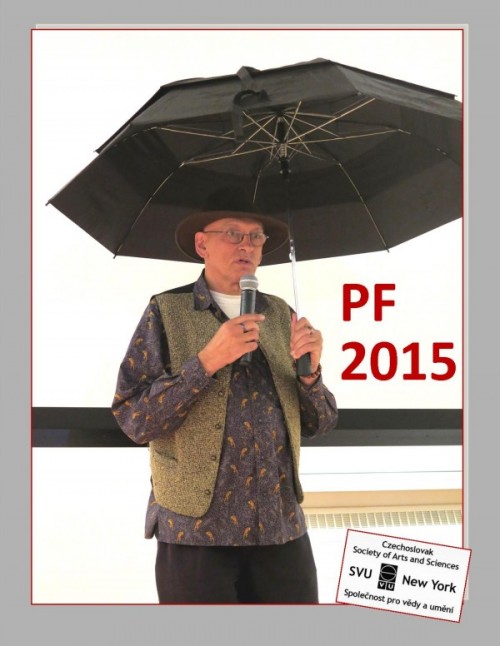