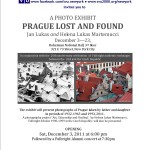 Photographs of Prague from 1932-1965 by renowned photographer Jan Lukas, and by his daughter Helena Lukas Martemucci from 1993-2011. Photos from Martemucciâ€™s series Art, Citizenship, Healing, taken during her Fulbright Scholarship in 1998-1999, will also be presented. Exhibition open Dec 3 – 23, 2011
at the Bohemian National Hall

Followed by a Fullbright Alumni concert at 7:30 PM.