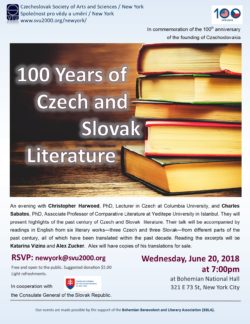 An evening with Christopher Harwood, PhD, Lecturer in Czech at Columbia University, and Charles Sabatos, PhD, Associate Professor of Comparative Literature at Yeditepe University in Istanbul, Turkey. They will present highlights of the past century of Czech and Slovak literature. Their talk will be accompanied by readings in English from six literary works—three Slovak and three Czech. Reading the excerpts will be Katarina Vizina and Alex Zucker. Alex will have copies of his translations for sale.

In cooperation with the Consulate General of the Slovak Republic.

Free and open to the public. Suggested donation $5.00
Light refreshments.

Christopher Harwood is a Lecturer in Czech in the Slavic Department of Columbia University. He also works occasionally as a freelance translator (from Czech and Russian to English) and interpreter (between Czech and English). His professional interests focus on methods for teaching Czech as a foreign language and on 20th- and 21st-century Czech literature and culture. He holds BA (1990), MA (1992) and PhD (2000) degrees in Russian literature from Columbia University. Chris is the President of the Czechoslovak Society of Arts and Sciences (SVU), New York Chapter.

Charles Sabatos is Associate Professor of Comparative Literature at Yeditepe University in Istanbul, Turkey. He is the author of many articles on Slovak literature, as well as on topics in Central European, Turkish, Russian and American literature and culture. He holds a PhD from the University of Michigan.

Kararina Vizina a native of Bratislava, Slovakia, holds an MA in Musical Theater from The Janá?ek Academy of Music and Dramatic Arts in Brno, Czech Republic and an MFA in Acting from Brooklyn College (CUNY). Katarina co-founded Cabaret Metropol, a band featuring many singers, each specializing in a different language. Katarina was featured with Cabaret Metropol as the pre-show for the 2014 off-Broadway production of Václav Havel’s The Pig. www.katarinavizina.com

Alex Zucker is a translator of Czech literature. His translations include novels by J. R. Pick, Petra H?lová, Jáchym Topol, Heda Margolius Kovály, Tomáš Zmeškal, Magdaléna Platzová, Josef Jedli?ka, Patrik Ou?edník, and Miloslava Holubová. From 2014 to 2016, he served as co-chair of the PEN America Translation Committee. In 2010 he won the ALTA National Translation Award for Petra H?lová’s All This Belongs to Me. You can find Alex’s database of Czech literature in English translation at bitly.com/czechlitinenglish. Visit his website at www.alexjzucker.com.

Books-for-sale will include: Society for the Prevention of Cruelty to Animals, by J. R. Pick; Three Plastic Rooms and All This Belongs to Me, by Petra H?lová; Angel Station, City Sister Silver, and A Trip to the Train Station, by Jáchym Topol; The Attempt, by Magdaléna Platzová; Love Letter in Cuneiform, by Tomáš Zmeškal; Innocence; or, Murder on Steep Street, by Heda Margolius Kovály; Case Closed and The Opportune Moment, 1855, by Patrik Ou?edník; More Than One Life, by Miloslava Holubová; The Drug of Art, by Ivan Blatný; plus Czech Plays: Seven New Works, an anthology of Czech drama, and The Man Between, a collection of essays on the life and work of translator Michael Henry Heim.