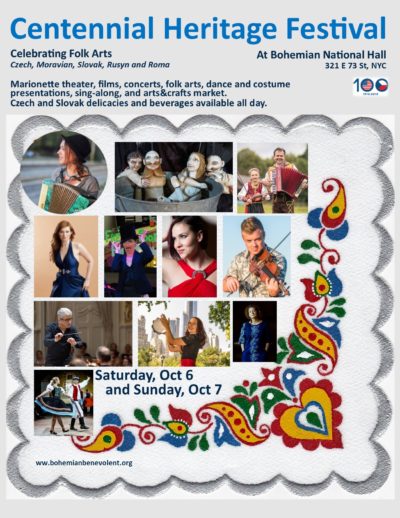 The two-day festival celebrates the traditional folk arts and two auspicious anniversaries: the Centennial of the founding of Czechoslovakia (1918) and the Millennial of the unification of the Lands of the Czech Crown, under Duke Oldrich (1018).

The festival will feature the Czechoslovak-American Marionette Theatre (CAMT) in the US Premiere of the mainstage marionette production, “Duke Oldrich & Washerwoman Božena: The True Story,” and a one-man family marionette show of Czech and Slovak fairy tales; and a USA debut concert of Beata Bocek, the talented Czech Polish folk singer and musician performing on a variety of instruments and in a variety of languages. She will also be performing in the main marionette production.

A market will offer Czech and Slovak arts and crafts, puppets and an array of traditional Czech foods and beverages.
(Vendors please register by Oct 1, 2018. One table fee $75/day)

4pm A DANCE CLASS BY LIMBORA DANCERS
A presentation about Slovak folkdance tradition with a dance lesson for the audience.

The festival is produced by GOH Productions in cooperation with Bohemian Benevolent and Literary Association (BBLA), Czechoslovak Society of Arts and Sciences (SVU-NY), CzechMatters with support by the Czech and Slovak Consulates in New York.