Recent years have witnessed the discovery of several photographic sources dealing with Sub-Carpathian Rus’ in the years 1919-1923, shortly after its incorporation into the Czechoslovak State. These sources range from the color photography by Rudolf H?lka (1887-l961), the architectural images of Florian Zapletal (1884-l969), and the photos and photogravures of the Russian émigré writer Nikolai P. Malitskii (1883-l963), newly uncovered in the archives of the Foundation for Russian History, Jordanville, New York. 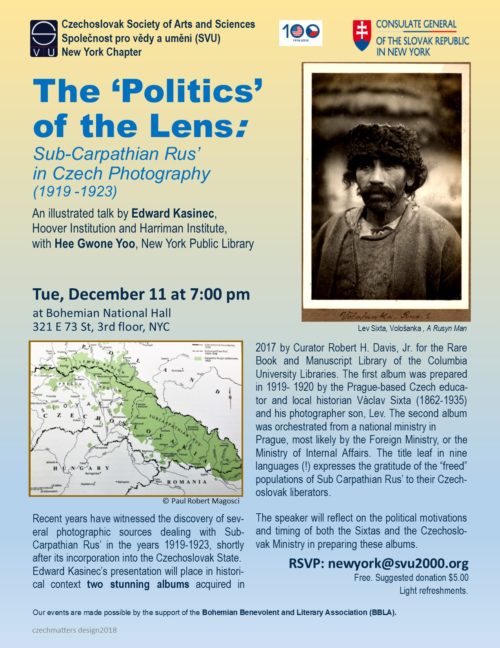 Edward Kasinec’s presentation places in historical context two stunning albums acquired in 2017 by curator Robert H. Davis, Jr. for the Rare Books and Manuscript Library of the Columbia University Libraries. The first was prepared in 1919-1920 by the Prague-based Czech educator and local historian Václav Sixta (1862-1935) and his photographer son, Lev. The second album was orchestrated from a national ministry in Prague, most likely by the Foreign Ministry, or the Ministry of Internal Affairs. The title leaf in nine languages (!) expresses the gratitude of the “freed” populations of Sub Carpathian Rus’ to their Czechoslovak liberators.
The speaker will reflect on the political motivations and timing of both the Sixtas and the Czechoslovak Ministry in preparing these albums.

Hee-Gwone Yoo is Senior Librarian and Slavic Collections Specialist at the General Humanities Division of Schwarzman Building, The New York Public Library. He received his MA and MLS from Queens College, CUNY. As a librarian, he has a particular interest in visual resources, rare books, and exhibitions and outreach. He has participated in numerous conferences, domestic and international, and is the co-author of the award-winning Visual Resources from Russia and Eastern Europe in The New York Public Library: A Checklist, in 2008, and several articles.

Organized by Czechoslovak Society of Arts and Sciences with the support of the Consulate General of the Slovak Republic in New York and Bohemian Benevolent and Literary Association (BBLA).