Free and open to the public.
Suggested donation $15.00 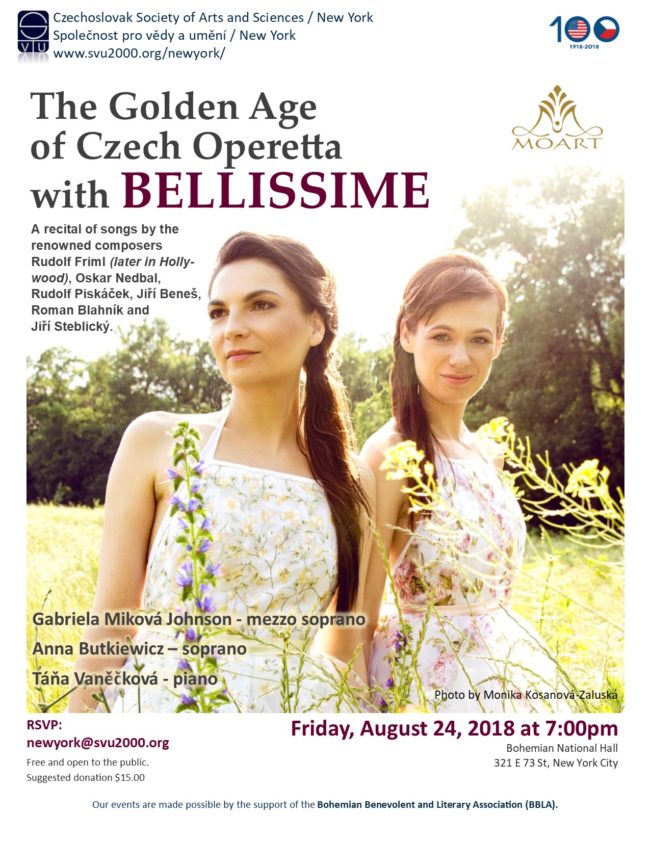 Gabriela Míková Johnson, a graduate of the Janá?ek Conservatory in Ostrava, is a singer, actress, and dancer based in New York. She has twice performed as soprano soloist in Händel’s Messiah for Gordon Stewart’s period-instrument production with the Philipstown Philharmonia. Before moving to the U.S., Gabriela performed many operatic, dramatic, and musical comedy roles in central and western Europe. Her career includes six seasons as featured soloist at Plze?’s J.K. Tyl Theatre (including Euridice in Orpheus in the Underworld, Mable in Pirates of Penzance , Roxie in Chicago, and Aldonza in Man of La Mancha), Bernstein’s Mass with the State Philharmonic of Brno, concerts with both the Janá?ek and the North Bohemian philharmonic orchestras, and three European tours of West Side Story. She teaches singing at the Storm King School in Cornwall, New York, where she has been Adjunct Instructor of Voice since 2013.

Anna Butkiewicz is a classically trained singer living and working in Warsaw, Poland, where she recently performed with Opera Kameralna. She received her Master’s degree from Ostrava University, Czech Republic, and for fifteen seasons was a featured soloist with the National Theatre of Moravian Silesia in Ostrava, where she performed many opera and light-opera roles, including Elisabeth in Land of Smiles by Franz Lehár (for which she received a Thalia Award nomination), Hana Glavari in The Merry Widow, the title role in Giuditta, and Helena in Offenbach’s Beautiful Helena. She has performed concerts with the Janá?ek Philharmonic Orchestra, and has also sung concerts in Japan and Austria. For five years she taught operatic singing at Ostrava’s Janá?ek Conservatory.

Tania Vanková is a Czech concert pianist living and working in Plze?, Czech
Republic. After graduating from the State Conservatory in Plze?, she joined the J.K. Tyl Theatre as accompanist. There she worked with the opera, light opera, and ballet divisions for twenty seasons. She teaches piano at the School of Arts in Plze?, and regularly performs with the Gala Strauss Orchestra in Austria and Germany.

* “Operetta” refers to a theatrical entertainment that, like opera, tells a story through music, but which unlike most opera treats of light subjects, usually romantic love, and in a comic style (no death or Germanic mythology here!), and whose music may be less sophisticated or complex. In the twentieth century this form gave rise to the American musical.