Introduction by one of the composers Eliška Cílková.

Jana Jarkovská will also perform at the Boston Flute Festival in October 2019. 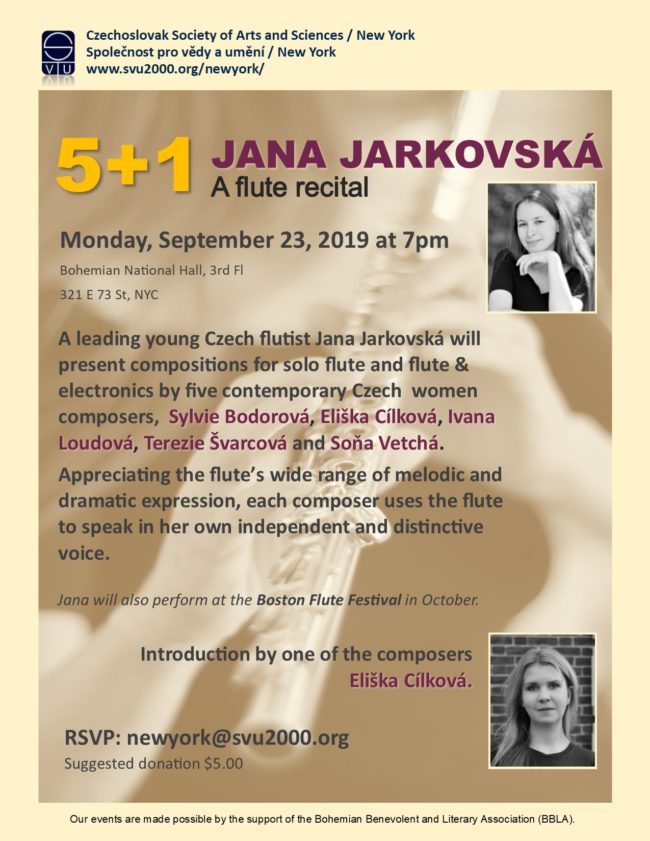 Jana Jarkovská, a leading Czech flutist of the younger generation, studied for six years at the Prague Conservatory. In 2013, she graduated from the Academy of Performing Arts (HAMU) in Prague and in 2015, she received her soloist diploma from the Royal College of Music in Stockholm, Sweden. She spent one semester at the Conservatorio di Musica “Giuseppe Verdi” in Milan (Italy), as an assistant professor in the Erasmus Placement Program. In 2018, she earned her PhD in Interpretation Theory from the Academy of Performing Arts (HAMU) in Prague, and released her CD of contemporary Czech music “Pidluke-padluke”. She currently teaches at the Conservatory in Teplice, North Bohemia, performing mostly as a member of the award-winning Duo du Rêve (flute & piano). As a soloist and chamber music player, she collaborates with a number of contemporary composers premiering their works and regularly records for the Czech Radio. Jana is working on a new CD release in 2020 as part of her contemporary project with Czech female composers. Next month, she will perform at the Boston Flute Festival.
www.janajarkovska.cz

Eliška Cílková, composer, began playing the piano at the age of four. She later studied composition and conducting at the Jaroslav Ježek Conservatory in Prague. She received her master’s degree in composition from the Academy of Performing Arts. In 2014-2015, she was a Fulbright research scholar in musical composition at Columbia University. Her electroacoustic project “Pripyat Piano – Sound Documentary of the Chernobyl Zone” was enthusiastically received in Europe. Eliška collaborates with diverse European artists and has composed music for documentary films and theatrical performances. Her work has been performed at numerous festivals in the Czech Republic and abroad. In 2015, she received the AHUV prize for “Best Czech Composer of Contemporary Music”, and in 2016, the international Musica Nova prize for the “Best Electroacoustic Composition.” She is currently pursuing her PhD in Musicology at Charles University in Prague.
www.eliskacilkova.com