An illustrated talk by Irena Kovarova

The world-renowned Czech filmmaker and book illustrator Jirí Trnka (1912-1969), the master of stop motion animation, brought to the screen works by from Kosmas, Shakespeare, Chekhov, Hašek and others. From tragedy to comedy, Trnka made adults appreciate puppets like nobody else.

The talk will be complemented by excerpts from Trnka’s films. 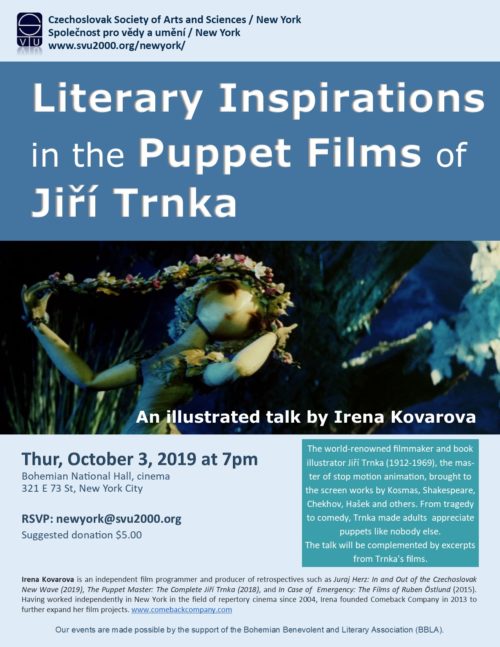 Irena Kovarova is an independent film programmer and producer of film retrospectives such as Juraj Herz: In and Out of the Czechoslovak New Wave (2019), The Puppet Master: The Complete Jirí Trnka (2018), and In Case of Emergency: The Films of Ruben Östlund (2015).

Having worked independently in New York in the field of repertory cinema since 2004, Irena founded Comeback Company in 2013 to further expand her film projects. In the past, Irena served as Director of Programming of the Young Visual Artists Awards of the Foundation of a Civil Society (2004-2009), and as Acting Director at Czech Center New York (1999-2004). A native of Prague, Irena has lived in New York since 1996.

The event is organized by the Czechoslovak Society of Arts and Sciences (SVU), New York Chapter.