A talk by Zuzana Rihova.
With reading by Alex Zucker, translator 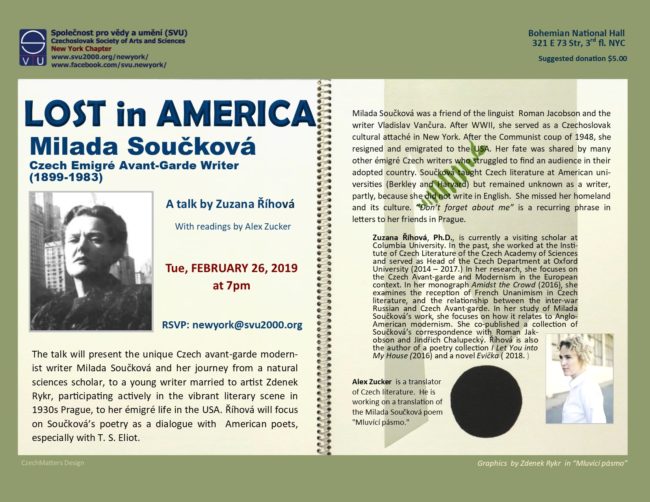 The talk presented the unique Czech avant-garde writer Milada Souckova and her journey from a natural sciences scholar, to a young writer married to modernist painter Zdenek Rykr, participating actively in the vibrant literary scene in 1930s Prague, to her émigré life in the USA. Ríhová will focus on Soucková’s poetry as a dialog with American poets, especially with T. S. Eliot.

Milada Soucková was a friend of the linguist Roman Jacobson and the writer Vladislav Vancura. After WWII, she served as a Czechoslovak cultural attaché in New York. After the Communist coup of 1948, she resigned and emigrated to the USA. Her fate was shared by many other émigré Czech writers who struggled to find an audience in their adopted country. Soucková taught Czech literature at American universities (Berkeley and Harvard) but she remained unknown as a writer, partly, because she did not write in English. She missed her homeland and its culture. “Don’t forget about me” is a recurring phrase in letters to her friends in Prague.

Zuzana Ríhová, Ph.D., is currently a visiting scholar at Columbia University. In the past, she worked at the Institute of Czech Literature of the Czech Academy of Sciences and served as Head of the Czech Department at Oxford University (2014 – 2017.) In her research, she focuses on the Czech Avant-garde and Modernism in the European context. In her monograph Amidst the Crowd (2016), she examines the reception of French Unanimism in Czech literature and the relationship between the inter-war Russian and Czech Avant-garde. In her study of Milada Soucková’s work, she focuses on how it relates to Anglo-American modernism. She co-published a collection of Soucková’s correspondence with Roman Jakobson and Jindrich Chalupecký. ?íhová is also the author of a poetry collection I Let You into My House (2016) and a novel Evicka ( 2018. )

Alex Zucker is a translator of Czech literature. He is working on a translation of the Milada Soucková poem Mluvící pásmo.