Annual commemoration of the fateful events in August 21, 1968 in Czechoslovakia. Films and Discussion.

Czechoslovakia: Portrait of a Tragedy
Directed by David Tucker (1968, 47min.)
A documentary film shot over six weeks before the Soviet-led invasion. It includes interviews with protagonists of the Prague Spring and people on the street, reflecting an overall sense of possibility and optimism rather than worries about suppression that followed a few months later. The film was recently restored by The Wende Museum, thanks to the late Rudolf Perina, a consultant and interpreter during the filming who later became a US diplomat specialized in European East-West relations.

Spýtaj sa vašich 68 (Ask at Home 68)
Directed by Barbora Bereznáková (2018, 28min.)
This documentary film is a result of an interactive project presenting memories of the events of August 21, 1968, that ordinary people across Slovakia, and Slovaks abroad, shared on a website. The film was broadcast on Slovak TV on the occasion of the 50th anniversary of the invasion and projected simultaneously in public spaces in Bratislava, Banská Štiavnica, Košice, Zvolen, and Spišská Nová Ves. 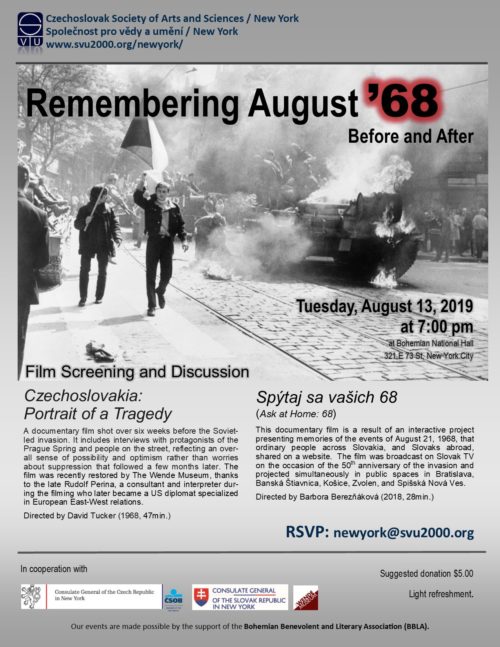