FILM + DISCUSSION
Screening of a 2019 documentary film about a Czech journalist and a hero of Bulgaria, Vladimír Sís (1889-1958) 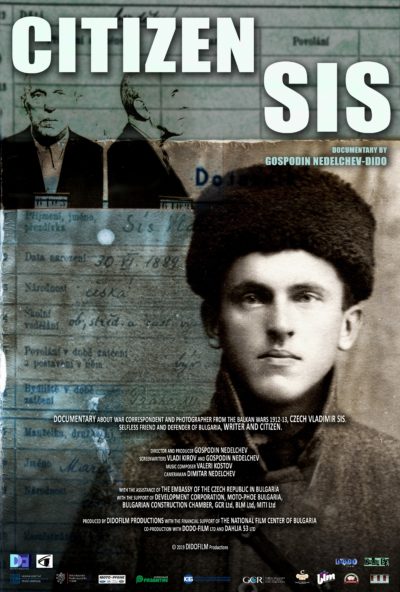 Vladimír Sís was a Czech patriot, journalist, and writer. At age 23, he sent his reports from the frontline of the Balkan War (1912-1913) as a correspondent for the Národní Listy newspaper in Prague. He became an important voice for the Czech national independence movement and the Bulgarian cause.Persecuted by the Austro-Hungarian regime, arrested by the Nazis, he was killed in the Leopoldov prison during the 1950’s communist purges in Czechoslovakia. In 1998, he was posthumously awarded the Order of T. G. Masaryk by president Václav Havel.

The film explores the European and the Czech history of the first half of the 20th century: The Balkan Wars from 1912-13, the T.G.Masaryk’s “MAFFIE” organization (1914), the World Wars, First and Second Czech Resistance – as Vladimír Sís participated directly and actively in all those events. The film was shot in Bulgaria, Czech Republic, Slovakia, and the Balkans and features Bulgarian and Czech researchers and close relatives of Vladimír Sís.

Gospodin Nedelchev, PhD, is an award-winning Bulgarian film director, artist, animator, and screenwriter of more than forty animated and documentary films. As an Associate Professor, he teaches Animation Directing at the National Academy for Theater and Film Arts in Sofia, Bulgaria, and is a member of the Union of Bulgarian Filmmakers and the Union of Bulgarian Journalists.

A light reception and continued discussion followed the screening and Q&A with Mr. Gospodin Nedelchev. Stand by for video on our SVU NY You Tube Channel.

Organized by the Czechoslovak Society of Arts and Sciences (SVU), New York Chapter, and the Bulgarian History Club in New York.