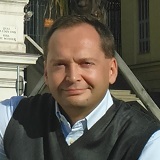 Mr. Georges Eichler has been supporting the Society since the year 2000. His contributions include expertise in administration, and he has sponsored the Society’s publications. He has received the Society’s Beyond the Call of Duty Award and five Presidential Citations. He received a special recognition from the SVU Prague chapter, at the 29th SVU World Congress (2018) opening ceremony in the Senate, Parliament of the Czech Republic. In 2019, he organized, with Prof. Michael Seng, an international conference on Challenges to the Rule of Law hosted by The John Marshall Law School in Chicago.

Mr. Eichler completed his diplomatic training at the Italian Diplomatic Institute in Rome (2002), co-sponsored by the University of Bologna and the SNA of Caserta. As a senior management officer at the Czech Ministry of Foreign Affairs, he also completed its Diplomatic Academy (DA IN 2007-2008). He holds a dual master’s degree in Business Administration and Economic Journalism from the University of Economics in Prague (2001). He presented outcomes of his Corporate Culture research The Story of SkodaAuto-VW at the Society’s 20th World Congress (2000) at American University in Washington D.C., appreciated by the Czech Senate President who was present.

Mr. Eichler was a national delegate to the Lawyer-Linguists group of the Council of the EU (2001–2004). For his project management work on the EU Law linguistic revisions, he received a recognition from the Czech Vice-Premier and Minister of Justice. For his leadership in organizing an international conference on the EU Services Directive (2004), he was appreciated by the British Department of Trade and Industry. He also chaired a government advisory body on electronic communications of the EU (2006), and as government auditor, he received the Certified Government Auditing Professional designation from the international Institute of Internal Auditors (IIA), New York (2007).