Milan Fryščák, longtime professor of Russian and Slavic Studies at New York University and for many years President of the New York local chapter of the Czechoslovak Society of Arts and Sciences passed away on April 16, 2020. He was a leader and active participant in numerous Czech cultural and émigré organizations for over 40 years.

Milan Fryščák was born in Dobra near Frydek-Mistek on June 27, 1932. He attended preparatory high school in Mistek and received his B.A. from Palacky University in Olomouc in 1956.

In the Fall of 1957, he made a daring escape from Communist Czechoslovakia when a ship he was on docked in Venice, Italy. He spent the next year and a half as a political refugee in camps in Cremona and Naples after which he was sponsored by an American friend and emigrated to Racine, Wisconsin in January 1959.

He moved to California in 1960 and studied at the University of Berkeley where he obtained his M.A. in Slavic Languages and Linguistics in 1962. In 1964 he became an American citizen and started teaching in the Russian Language department of Wittenberg University. He obtained his PhD in Slavic Linguistics from Ohio State in 1969.

From 1971 until his retirement in 2008, Prof. Fryscak taught at New York University in the Department of Russian and Slavic Studies. He was also a graduate advisor to Masters and PhD candidates in that department.

From the 1970s through the 1990s he spent the majority of his summers directing and teaching at the Russian School of Norwich University in Vermont.

In 1988 he was selected by IREX for an academic exchange between the United States and Czechoslovakia. After 31 years in exile, this allowed him to reunite with his younger brother and other relatives.

Following the Velvet Revolution in 1989 he was instrumental in establishing some of the first scholar exchanges between Charles University and NYU. He served as Director of NYU’s Summer Program in Prague, lectured at Charles University, and taught in their Summer School of Slavonic Studies. In recognition of his efforts, on the occasion of the 650th anniversary of the founding of Charles University he was honored with the Charles University Memorial Medal (“Nummum Memorialem”). 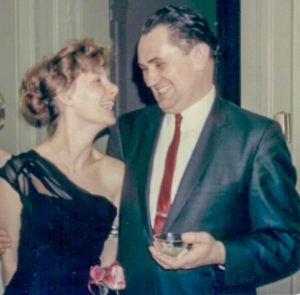 He was President of the New York local chapter of SVU and among other activities organized three SVU conferences held at NYU and Columbia University. He was the General Secretary of the Czech and Slovak Solidarity Council (which was until 1993 known as the Council of Free Czechoslovakia) and was a member of the Management Committee of the American Fund for Czech and Slovak Relief. Until health issues prevented him from continuing, Prof. Fryscak remained very active in Czech-American organizations.

He is survived by his wife Eva, his sons Peter and Francis, his daughter-in-law Audrey, grandchildren Gabriel and Beckett, his brother Josef and other close relatives in the Czech Republic.