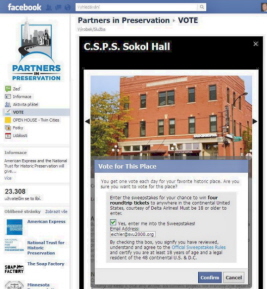 CSPS Sokol Hall in St.Paul, MN, the oldest Czech-Slovak Sokol Hall in the USA, is about to receive the AMEX Grant within the Partners in Preservation project.

American Express and the National Trust for Historic Preservation announced that the CSPS Sokol Hall is a finalist with 25 historic sites for part of a $1 million grant.

Preliminatry results of the public vote on Facebook show the CSPS Sokol Hall got on the 3rd position of the 25, with some 9% share of the grant allocation.

The current project will improve the second floor theater, including making the stage accessible, and upgrading the audio, projection, mechanical and theater systems to meet modern performance standards and renovation of the historic stage and antique backdrops. Support our collection of over 200 community plays published in Czech in Prague between 1880 and 1930. All for our hall’s 125th anniversary next year Summer 2012!