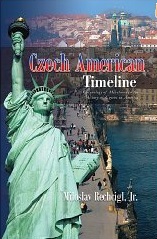 This is the title of new book the SVU Scholar-in-Residence and Past President of SVU Míla Rechcigl has published. The book chronicles important events bearing on Czech-American history, from the earliest known entry of a Czech on American soil to date.

This comprehensive chronology depicts the dazzling epic history of Czech colonists, settlers, as well as early visitors, and their descendants, starting in 1519, with Hernán Cortés’ soldier Johann Berger in Mexico, and in 1528, the Jáchymov miners in Haiti, through the escapades of Bohemian Jesuits in Latin America in the 17th and 18th centuries, the Bohemian and Moravian pioneer settlers in New Amsterdam (New York) in the 17th century and the extraordinary mission work of Moravian Brethren in the 18th century, to the mass migration of Czechs from the Habsburg Empire in the second half of the 19th and the early part of the 20th centuries and the contemporary exodus of Czechs from Nazism and Communism. Historically, this is the first serious undertaking of its kind.

The book has been published by AuthorHouse in Bloomington, Indiana and is available as a hardcover as well as a paperback and E-book.

This is what the Czech Ambassador Petr Gandalovič has written in his Foreword about Rechcigl’s book:

This is another first for Míla Rechcígl, SVU Scholar in Residence and one of the founders and Past Presidents of the Czechoslovak Society of Arts and Sciences (SVU) for many years. Hardly two years have passed since the publication of his authoritative Czech American Bibliography. A Comprehensive Listing with Focus on the US and with Appendices on Czechs in Canada and Latin America, and now Rechcigl is coming out with his new Czech American Timeline: Chronology of Milestones in the History of Czechs in America.
His latest work, Czech American Timeline, is not a mere chronology of dates and events bearing on Czech Americans but it is a comprehensive chronicle of history of Czech pioneers and their descendants who affected American history, practically from the time the New World was discovered to the contemporary era.
This unique publication is a magnificent testimony, not only to the fact that the Czech American immigrants found their new home in the New World, but also that they significantly contributed to its creation. The fruit of Míla Rechcigl’s admirable efforts to trace these men and women, as well as their descendants, and to follow their phenomenal achievements and august contributions, is a permanent reminder of their, sometimes hard and difficult, but always absorbingly interesting life stories which form a strong and eternal bond between our two nations.
This distinctly informative and thought-provoking vade mecum is delightfully readable, stimulating, enthralling and inspiring to the point that you won’t be able to put it down, just as I could not. It is a must for anybody interested in Czech American history and culture. I highly recommend it.
Petr Gandalovič
Ambassador of the Czech Republic to the United States